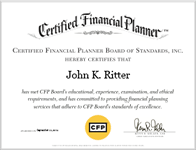 If you see John out and about in Anderson Township, there’s a fair chance someone will come up and say “Hey, Coach.” John, and his father (known as Coach Papa) have coached countless kids over the years – from tee ball up to children who are now in high school. From the basketball court to the baseball diamond. And it has been an absolute labor of love.

“There’s something incredibly special about giving instruction, and seeing a player put it into action. Learning a new skill. Modifying something that wasn’t previously working. That’s where the real fun is from a coaching standpoint – not just winning games.”

John was very involved in athletics growing up, which led to a Hall of Fame golf career at Anderson High School and four years of MCC Championship winning golf at Xavier University. This paved the way for his coaching now.

“I was blessed to have great coaches and instructors growing up”, he says. “It showed me the relationship aspect that any good coach builds with his players, and the advice giving aspect to help them perform at their best. It’s not unlike the relationship we build with clients, which leads to advice to help them hit their financial and life goals. It’s a teamwork structure where both parties are fighting to reach the same end point.”

While it likely didn’t occur to him at the time of starting the company 22 years ago, RDFA was going to allow him to have coaching at the forefront of both his professional and personal life.

“Someone asked me one time what I do for a living. I said, I’m part financial planner, part investment manager, part educator, and part counselor. I now realize that I should have added coach into this equation as well.”